A bigger splash: our 10 favourite films about swimming

Posted on Aug 05, 2013 By The Beach Company INDIA Online Swimwear and Beachwear Shopping

From the bizarre Alphaville to the barking mad Lady in the Water, swimming pools have been good to film directors

Swimming scenes are good value, they can be dramatic, or atmospheric, or sensual, or boringly normal. The pool offers a film-maker a kind of instant spectacle for which not much money need be paid. School swimming contest scenes are good for establishing background family life - kids ploughing up and down the pool, mum and dad cheering on the sidelines - and people hanging out together in the pool is a good way of showing easy intimacy, physicality, which need not be sexualised, but of course often is. The pool itself is always an interesting, even beautiful thing to shoot, especially an indoor pool!

A classic, perhaps the classic of this obscure genre, focusing on the now dated suburban-exotic fetish of the back-yard pool. Based on a John Cheever short story, this strange and intriguing film stars Burt Lancaster as a guy who, finding himself poolside in the house of a neighbour sets himself the task of swimming back home in all the backyard pools that stand between him and his house. And each pool discloses a secret about himself, his neighbours and his past. A richly sensual film.

The first of the great swim films starring the movie world's Chlorine Queen, Esther Williams, one of the most elegant and sublimely beautiful stars in Hollywood history. A former swimming champion, who appeared in the "Acquacade" show in the San Francisco World's Fair, she then went on to appear in a string of MGM musicals, making her a uniquely amphibious star, demonstrating a rare ability to stay graceful and plausibly glamorous while swimming.

This was part of the bittersweet Full Monty/Calendar Girls British genre of movie-making, about ordinary people reclaiming their self-respect through doing something wackily extraordinary. It's a little icky, to be honest, but it has the outstanding Peter Mullan playing the redundant shipyward worker who conquers his demons by attempting to swim the English Channel - and Mullan is engagingly tough yet vulnerable in the role.

Charlotte Rampling stars in this teasing, baffling, and occasionally frustrating psychological suspense thriller. She plays an over-worked writer of detective stories who borrows a beautiful house in France with a spectacular pool to recharge her batteries. But to her chagrin, she discovers she has to share the house with the beautiful and sexy young daughter of its owner, played by Ludivine Sagnier, who hangs out by the pool in her bikini all day. It's an exasperating film in some ways, but the way in which the pool itself becomes the object for intense and ambiguous fascination is gripping.

Not exactly a swimming film, but one in which a swimming pool is very important, and a film which may have inspired Ozon's Swimming Pool (above). An obnoxious, disciplinarian headmaster in a French boys' boarding school is the subject of a murder plot hatched by his long-suffering wife and wronged mistress: they will murder him by drowning him in the bathtub, and then dump the body in the school pool, to make it look like accidental drowning. But after the killing, the corpse vanishes from the pool. What on earth is going on? A classic chiller, and an uproarious final twist.

You'll need a strong nose-clip and goggles to get through this one. After Waterworld, Kevin Costner evidently felt he needed another water-based film, so he plays a US Coast Guard "rescue swimmer" whose job it is plunge straight into the icy depths and pull struggling souls out of danger. Many poolside scenes, in which he has to coach a cocky youngup-and-coming rescue swimmer played by Ashton Kutcher. 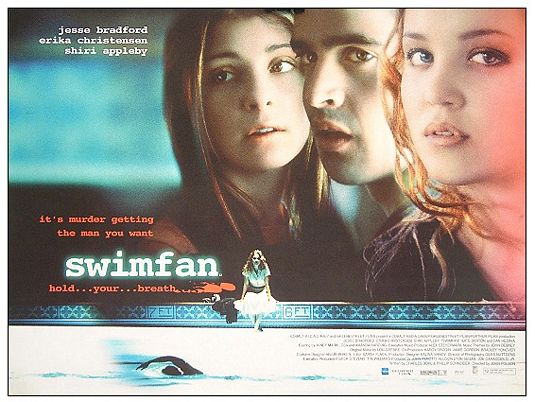 This Hollywood teen thriller has proved to have quite a DVD rental following since its release, and it makes brutally, histrionically explicit all the things which are simmering below the surface in Water Lilies. A young high school guy with a promising swimming career has a one-night stand with a dangerous blonde, played by Erika Christensen, who then stalks him in person and on the net, with the handle "Swimfan". Lots ofweird atmospherics at the after-hours underlit pool at night.

Straight to video in the UK for this inspirational sports movie, which is notable in that it points up the wholesome, non-sexual side of swimming. Terrence Howard plays a determined guy who starts a swim team for the troubled and wayward young people in Philadelphia in the 1970s, a time in which racism was overt. It's a by-the-numbers film, but interesting and valuable in that it's a reminder of the days when the segregated swimming pool was the symbol of the ugliest racism.

This film is, sadly, a mark of shame in the history of swimming pools on film. Fantastically conceited and pretentious, and mostly barking mad, it's about a water nymph called Story (Bryce Dallas Howard) who swims into an apartment-complex communal swimming pool, on a mission to make contact with the janitor (Paul Giamatti) and to spread healing love throughout all mankind. Mr Shyamalan is out of his depth and his floaties are leaking.

Er, not really a swimming film, but one with surely the weirdest swimming pool scene in cinema history. In the repressive society of the future, dissidents and free-thinkers are made to "walk the plank" out on the diving board at a swimming pool, then machine-gunned so that they fall with a splash into the water. A typically bizarre comic scene from the master.