Celebrate Independence Day With UPTO 20% OFF ALL ORDERS. Discount applied at checkout.

Posted on May 28, 2014 By The Beach Company INDIA Online Swimwear and Beachwear Shopping

What traveler hasn’t gotten off a plane after a long flight and, suddenly trying to adjust to a warm climate, thought about a dip in the water?

Marieke van der Velden, a frequent visitor to places like sub-Saharan Africa and South Asia, has it down to a routine: No sooner does she leave an airport terminal than she asks her driver where she can find a good pool – and off they go.

But when she arrives poolside, it’s doubtful she will get so much as her feet wet. “I’m not a big swimmer,” she confessed.

Ms. van der Velden is there for the pictures.

A photographer based in Amsterdam, she has traveled extensively for news organizations and nonprofit groups, documenting land-mine victims, child mortality and AIDS. It can get heavy. But during a 2009 trip to Burkina Faso, a turbulent Ouagadougou sky caught her eye. She got a shot of storm clouds off in the distance. There was a hotel pool in the foreground. She gave it little thought.

A few days later, in Weotinga, her gaze was again drawn to an ominous sky, where bands of dark gray hung over buildings, trees and — what do you know? — another pool in the foreground. “Two minutes before the flood came,” reads the caption.

It was only when Ms. van der Velden was back in the Netherlands showing her work to a friend that pools moved from foreground to forefront. She decided to photograph them as a sideline whenever she was traveling on assignment. The result is a series of photos called, appropriately enough, “Swimming Pools.” 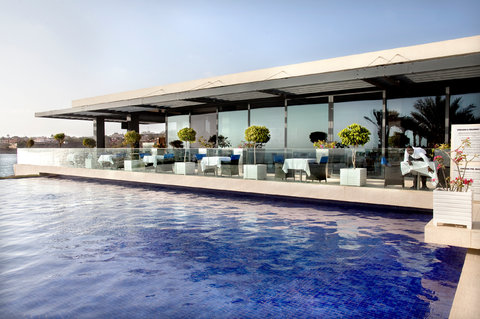 Marieke van der VeldenDakar, Senegal. Preparing for dinner with a view on the Atlantic Ocean during sunset at the newly built Radisson Blu Hotel.

Since she began, Ms. van der Velden has photographed pools in Afghanistan, Bangladesh, Albania and Uganda, among other countries.

She is not the first artist to turn her attention to pools.

Beginning in the 1960s, David Hockney produced a series of sun-drenched pool paintings that would make even Woody Allen want to pack his bags and move to California. (“O, wow,” Ms. van der Velden wrote in an e-mail after the paintings were called to her attention. “This is so beautiful. I never saw these paintings. It feels so clear and bright and peaceful.”)

And in John Cheever’s short story “The Swimmer,” a young man decides to make his way home across the suburbs by swimming from pool to pool. Somewhere along the way, youth is lost, as are prosperity, happiness and any sense of pools as a place anyone would want to spend time in.

There are photographs of girls in Kenya playing at a resort, and of students lounging on deck chairs in Malawi. But there is also a photo of three boys at a pool in Baghdad, where Ms. van der Velden traveled in 2011, when American forces left the country. There is no hint of warfare in the picture, but it is hard to look at the boys without wondering if this is just a stolen moment of happiness. In Coonor, India, an empty pool on a former British estate speaks of empires gone and legacies of uncertain value.

Other photographs are even more unsettling. Near Monrovia, Liberia, a pool that once belonged to President William Tolbert, who was killed in 1980, is filled with murky water. Elsewhere in Liberia, poolside tables are stacked upside down at a house said to belong to a relative of Charles Taylor, the Liberian leader convicted of playing a role in atrocities in Sierra Leone.

Ms. van der Velden does not always come away with a shot. In Chicago one winter, she says, a rooftop pool was full of snow, just begging to be photographed, but no one would unlock the door to let her get to it. And sometimes, she visits a pool, walks around and leaves.

Your average swimmer may decide not to go into a pool for the ordinary reasons. Water that’s too cold, perhaps. Too much chlorine. Or maybe there’s not enough chlorine in the world to make up for all those little kids splashing around the shallow end.

When Ms. van der Velden gives the thumbs-down to a pool, it is harder to put into words. She has to feel a “click.” She has to feel that her photographs will tell a story.

“There are a lot of swimming pools in the world that are not interesting at all,” she said. “They are just swimming pools. Nothing is happening.”