Perfect Swim Stroke- Should a swimmer's arms serve as paddles or propellers?

Posted on Feb 19, 2013 By The Beach Company INDIA Online Swimwear and Beachwear Shopping

By THE BEACH COMPANY 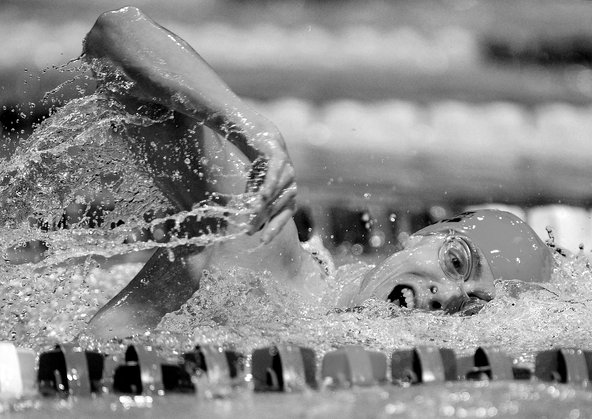 Should a swimmer’s arms serve as paddles or propellers? That question, abstruse as it might seem, underlies a long-running controversy in swimming about the best, most efficient technique for the freestyle and the backstroke. It also prompted a new study from a group of scientists at Johns Hopkins University that, in seemingly answering the question, is likely to provoke even more debate.

The physics of swimming are simple enough. To move through the water, you must generate thrust. To do so, you can use dragging or lifting forces. Drag is created by, unsurprisingly, dragging back against the water and, in the process, pushing an object, like the swimmer’s body, forward.The concern about how best to position and move the arm during the freestyle stroke (also known as the front crawl) and its inverse, the backstroke, first gained prominence back in the 1960s, when James E. Counsilman, the famed Indiana University men’s swimming coach known as Doc, decided to apply scientific principles of propulsion and fluid dynamics to swim techniques.

Lift, on the other hand, is created mainly by the flow of fluid around an object moving at an angle through the water. The fluid flows faster around the more curved side of the object, lifting and thrusting it forward. Ship propellers work on this principle.

TrevorJohnston.comIn the deep-catch stroke, illustrated at top, the hand pulls long and deep through the water. In the scull, below, the hand traces an S shape.

But until Doc Counsilman weighed in, it was widely believed that swimming, for humans, involved primarily drag forces. You pulled against the water, like someone paddling a canoe, your arm remaining straight, palm perpendicular to the body. This stroke technique is often called a “deep catch” style of swimming, since you pull long and deep against the water.

Coach Counsilman was convinced, however, that lift could and should provide a majority of the propulsion for human swimmers, and that the way to generate lift was to scull, or move the stroking arm through an S-curve underwater.

In his revised version of the freestyle, the arm, bent as it breaks the surface, pulls back against the water at first, as in a paddling stroke. But then the arm starts turning sideways in a gentle curve as it begins to trace an S shape, the thumb heading up as the palm turns parallel to the body. The arm reverses that motion to traverse a full S shape before emerging from the water.

Fluids would flow swiftly around the hand as it sliced through the water and, Coach Counsilman contended, create more lift than the deep-catch stroke.

In the years since, sculling during the freestyle stroke and backstroke became commonplace among elite and recreational swimmers.

But many coaches continued to question whether lift, generated by sculling, was really the fastest, most efficient way for swimmers to reach the wall.

So the Johns Hopkins scientists, who before the 2008 Summer Olympics had studied how best to perform the butterfly stroke (their conclusion: have extremely flexible ankles and, if possible, big feet), decided now to put the two strokes to the test in a series of complex computer simulations.

They began by creating a virtual animated arm, using laser scans and motion-capture videos from Olympic-caliber swimmers. “We decided to separate the arm from the rest of the body so the we could study, in isolation, the underwater flow dynamics” around a swimmer’s arm during the freestyle stroke or backstroke, says Rajat Mittal, a professor of mechanical engineering at Johns Hopkins and a devoted recreational swimmer, who oversaw the study.

They then gathered underwater videos of elite swimmers, supplied by USA Swimming, which they categorized as displaying either a sculling or a deep-catch stroke.

The scientists ran their animated arm through multiple simulations of each stroke, requiring thousands of hours of computer time.

The result was “a bit of a surprise,” Dr. Mittal says. It turned out that lift was, as Doc Counsilman had maintained, important for efficient, and therefore fast, stroking. In all of the scientists’ simulations, lift provided a majority of the propulsive force.

But sculling did not supply much lift. In fact, it impeded both lift and drag. “Our shoulders won’t twist all the way around,” Dr. Mittal says, meaning our arms won’t lever about as ship propellers do, and the amount of lift we can create by sculling is small.

The better choice for human propulsion, he says, was the paddlelike deep-catch stroke, which actually produced more lift than sculling, along with a hefty dose of drag.

“All things being equal, our data show that the deep-catch stroke is far more effective,” Dr. Mittal says.

Of course, races are not won or lost by disembodied arms, and as Dr. Mittal points out, “all things are not equal, most of the time.” An effective deep-catch stroke requires considerable shoulder strength, which many swimmers lack, making a sculling-based stroke easier for them, at least until they develop robustly muscled shoulders.

“How you roll your body in the water with each stroke will also matter,” he says, as will overall fitness. “Sculling is less fatiguing,” so less-fit swimmers may opt to scull, he says.

But for fit, powerful swimmers, or those who aspire to become such, “my advice would be to use the deep-catch stroke,” he says.

“Anecdotally, we’ve been told that more and more coaches are moving to the deep-catch,” he continues, and his group’s findings suggest that for most swimmers, whether elite or recreational, “that is the way to go.”